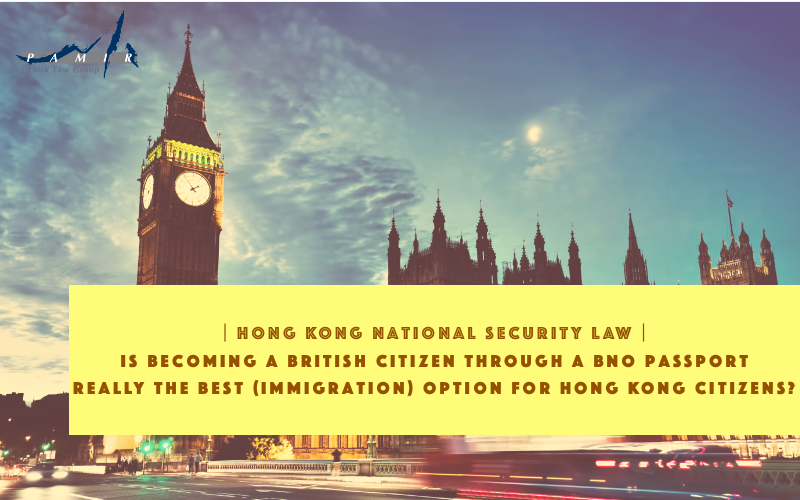 Under the current turbulent political climate of Hong Kong, citizens have started turning to the possibility of leaving Hong Kong. Since May 21st, Google Trends point to a spike in searches such as “BNO,” “national security law,” “Taiwan immigration,” and “immigration.” May 22th saw the first peak in searches for these terms, with the popularity of these terms being equal. 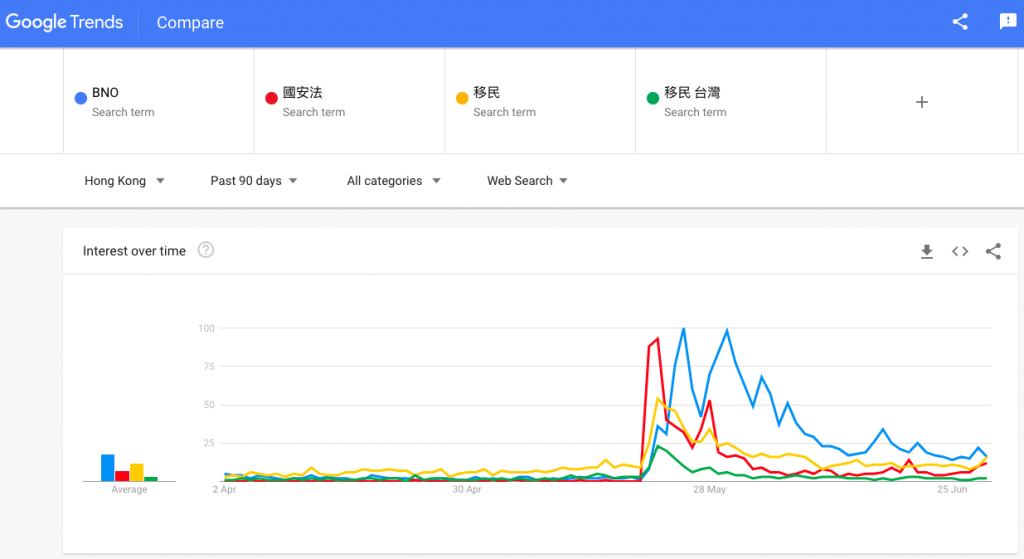 However, searches for “BNO” has remained popular while searches for “Taiwan immigration” and “immigration” experienced a significant decline between May 27th and June 6th. This demonstrates a strong interest of Hong Kong citizens to acquire British citizenships. According to the British government, 35 million out of 730 million Hong Kong citizens currently hold BNO passports. There are still 290 million citizens eligible for the BNO status.

BNO passports currently enable holders to reside in Britain for six months without visa. With the passing of the national security law, those in compliance with regulations may apply for British citizenships.

Hong Kong citizens with BNO passports may reside in Britain for six months without a visa, but are not granted the same rights as British citizens. BNO citizens are not allowed to permanently stay in Britain or work legally, nor can they pass on their BNO status to their children. People who currently already hold BNO passports may, after meeting certain requirements, apply to become a British citizen.

The British government has announced via the official Home Office website that it would consider expanding the rights currently granted to BNO citizens in order to protect Hong Kong citizens if the Chinese Communist Party were to pass the national security law. The permitted residency period for BNO citizens will be extended from 6 months to 12 months. Aside from a longer stay, British Prime Minister Boris Johnson has indicated that the British government is not against authorizing BNO passport holders to work in Britain. Dominic Raab, First Secretary of State and Foreign Secretary, announced on July 1st that Britain will officially expand the rights for BNO citizens, as well as providing the people of Hong Kong regulations tailored to their needs.

BNO citizens don’t necessarily have to go to Britain. Taiwan has captured the hearts of Hong Kong citizens with its open and friendly environment.

Pamir Law Group, committed to assisting those in the Hong Kong and Macau region to move to Taiwan via investor immigration, has been in contact and service of almost a hundred Hong Kong citizens considering immigration in the past six months; eighty percent of which expressed concern over Hong Kong’s situation.

Around ten percent of Pamir’s clients that inquired about investor immigration in the past six months are BNO citizens; however, Taiwan still remains the superior immigration choice in their minds.

Ms. Luo (54 years-old), who works at a fund management company, had said, “Because the living environment in Hong Kong is so high-pressure, I hope to live in Taiwan after i retire.”

Ms. Liu (47 years-old), who works at a real estate company, has indicated that she “hopes to give her children a stable environment to develop in.” Given the instability of the Hong Kong administration, she is considering immigrating to Taiwan, where the language is familiar to her and her family.

Mr. Mai, who works at the airport, has also been considering leaving Hong Kong because of “Hong Kong’s shaky political climate.” He had considered immigrating to Japan but changed his mind after taking into account “the language difference and high living costs.” Mr. Mai had visited Taiwan before but “did not like Taipei’s rainy weather.” He hopes to move to the sunny regions in central Taiwan via investor immigration in the near future.

Applying for British citizenship through BNO status has stricter requirements than its Taiwanese counterpart. Hong Kong citizens that apply for investment immigration may keep both Hong Kong and Taiwanese citizenships.

If one wishes to transition into a stable environment to begin a new life, a Taiwanese investor immigration status appears to be a better option than the prospective BNO status which some Hong Kong citizens are hoping for. Though the new BNO status post-Hong Kong-national-security-law grants work authorization and a potential path to permanent residency/British citizenship (after 5 years of residency and 12 additional months), the issue of cultural, weather, and language differences still remains; not to mention one would have to arrange schooling and working plans on his/her own.

Comparatively, Taiwan offers better immigration conditions to those in the Hong Kong and Macau regions. One needs only to invest 150 million Hong Kong dollars and fulfill the residency/investment requirements to get a Taiwanese citizenship. This would grant legal right to live in Taiwan and access to welfare such as Taiwan’s universal healthcare. There are no limitations on work options even if one came to Taiwan via investor immigration. The investor immigration status will also allow people to keep both their Hong Kong and Taiwanese citizenships. The Taiwan administration has announced prospective plans to release a Hong Kong humanitarian aid package. The administration has also established a Taiwan-Hong Kong Service Exchange Office to assist Hong Kong citizens in residency and immigration matters.